as if I weren't obsessed enough...

...Recently my good friend Logan opened my eyes to the music blogosphere. and the fact that you can download music there. Needless to say things are getting out of hand. It's so exciting and I can't seem to stop! Right now, I am procuring music faster than I can listen to it. I'm hoping this is just the beginning stage, and that eventually I will chill out a little bit.
Otherwise, I have been really busy at work lately.  October began a new term and I now have a set 35 classes a week.  In addition to that I also teach some private lessons and trials. So the only free time I have at work is lunch. Which means I do all my prop-making and lesson planning at home. I really can't complain when most of the "work" I take home consists of coloring, cutting, and pasting.
There are some days at work that I just dread. This is in large part due to two 5 year olds and a seven year old. But really, it's not so bad, and the good kids outweigh the three terrors.  Last week I suppose I had one of those rewarding teaching experiences I've heard so much about.  In one of my baby classes there is this girl who even after coming to class for 5 months is still really shy.  Most of the shy ones came around a long time ago.  But she's not just shy.  Her facial expression is a dead-pan stare that leads one to believe she wants you dead. She doesn't smile. Ever.  A coulple of weeks ago however, she did smirk when I was blowing bubbles. (Most of the babies just loose it and scream with joy like they're going to explode.) She missed a class and so I taught a make up class with just her and her mother. Which went about like I expected it to; no response from her what-so-ever. After the lesson her mother was signing up for the new term.  It's usually my job to entertain the kids when the parents are taking care of paperwork. Until this day, she would never even sit next to me, or show interest in the myriad of toys I'd desperately wave around in front of her.  THIS time she sat next to me! AND she played with the toys! Soon she was sitting in my lap! THEN she followed me over the the main play area, away from her mother, and actually let me PICK HER UP AND HOLD HER.  I honestly still can't believe it. Apparently I'm the first person she has let hold her that wasn't a family member. (aw.) As wonderful as this is, I have a feeling she won't remember this next week.
I'm going to a sake festival next weekend. That will surely make for a more interesting post and I will include pictures.  Until then...
Posted by Whitney at 9:43 AM No comments:

Ok, so I have been doing a terrible job at maintaining my blog. However, I now (finally) have internet from my apartment.  Perhaps I will blog more often now that I have no excuse. Time will tell. I am not going to attempt to summarize the past four months. I will try to keep it up to date from here on out.
This week has been a good week. It was cool Tuesday morning as I stepped outside my apartment building. As I got on my bike, it struck me that autumn is beginning to creep in.  Hiroshima has had some cooler days this month, but on Tuesday morning, it was different. It smelled different and the air had a different texture. The smell and feel of fall. I can't wait! I'm not really that big on summer. I think it's because growing up in the southwest, most of my life seems to be summer. The past couple of months really haven't been that uncomfortable, but autumn is my favorite season and I'm really looking forward to the gradual shift from lush green to bright red and gold.
I have been really consistent in my yoga practice lately and I've been eating really well. I feel amazing. Why did I ever stop? My joints feel SO much better. My routine after work: I eat a salmon onigiri (rice ball) on my bike ride home. The fact that I can eat and drive says a lot about my improved biking skills! When I get home I do yoga for about half an hour. Then I make dinner which usually consist of a salad (tofu, red bell pepper, avocado, red leaf lettuce, and sesame dressing), steamed vegetables, and maybe a bowl of miso soup. (I am seriously addicted to: sesame dressing, salmon onigiri, miso soup, and udon. I eat them nearly everyday.) After dinner I usually color, cut, and paste various props and supplies for my lessons while watching a movie or listening to the BBC or NPR. That is my life in a nutshell during the week.
Since my arrival, I have not had a dull weekend. Between the birthdays and sayonaras, there is always some obligation (excuse) to go out.  I have never been very good at turning down a night out with friends. Last night I was successful in staying home.  Christina came over and we had a movie night.  It was a refreshing change of pace. I had planned on going to a flea market this morning, but I had the dates confused. The one in my neighborhood is next week. So we went to the Hiroshima Museum of Contemporary Art.  Unbelievably I hadn't been yet.  In fact, today was my first visit to a museum in Hiroshima.  I was an Art History major and typically the first thing I do when I visit a city is check out a museum or two. I feel that I am finally "settled in" and that I can really start exploring this city.
I enjoyed the museum today and plan on going regularly. (Even museums in Japan have stamp cards. They are mad for stamp cards here!) The temporary exhibit is a retrospective on Masuo Ikeda.  Admittedly, I'm not well versed on Japanese artists, but I would really like to learn as much as I can during my stay. I realize that I'm in Japan, and I don't expect things to be in English....but I was disappointed that there were no English guides or descriptions of the art work. I can't recall ever visiting a museum that didn't have guides and information in multiple languages. I wish I could have walked away today with a little more knowledge about Masuo. Some of his themes were similar to the focus of my thesis on Sigmar Polke.  One series of prints in particular really appealed to me and I could see myself writing at length on his work. But do I want a future in art history any longer?  I thought I had ruled that pursuit out..... 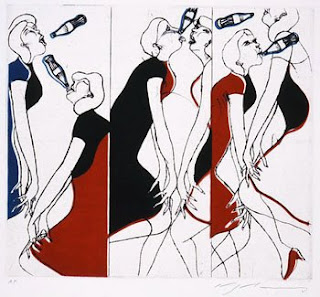 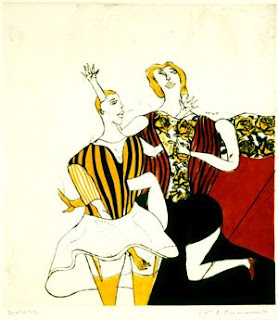 Yes, yes I know. I've been here a month and I'm just now getting around to my first post from Japan. What can I say? I'm a procrastinator. But better late than never, and now that I know where to go for a strong wireless connection, I hope to post at least once a week from here on out. For now, a summary on my first week in Japan.
The flight over was long, but it really didn't feel so long as I thought it would. The woman sitting next to me was really nice but also kept to herself, which in my opinion is the perfect in-flight neighbor. I didn't sleep at all on the plane. I was thinking that if I was really tired when I landed, perhaps my jet lag wouldn't be so bad. (I was wrong.) I was on the first flight to arrive, along with 6 other Amity trainees. We had to wait about four hours in Osaka Intl. for the other 6 to arrive. This really wasn't so bad, because we all had plenty to talk about. Finally, we set out for Okayama. We took the Shinkansen! I really couldn't tell you much about how it felt to be on such a fast train, because I passed out almost immediately. I think it was nearly 11pm when we finally arrived at the "dorm". My roommate was the one girl I hadn't really spoken to yet, but she turned out to be the ideal roommate! I couldn't have asked for a better training companion.
We had the first two days off! They recommended we "rest" however there was no way I could just sit around when I was finally in Japan. Sunday we went to Kuraku-en Garden and Okayama-jo. They were pretty much everything one would expect from a Japanese castle and a Japanese garden. Even so, it really didn't seem to sink in that I was finally in Japan and that I would be living here for a year. In fact, there really hasn't been any one moment to speak of...it's been a very gradual realization. Quite anti-climatic really. On Monday we went to Kurashiki. It's a smaller town nearby in which there is an ancient merchant quarter with buildings dating from the Meiji period. We considered going to Tivoli, a small amusement park, but decided against it. We just took pictures with the topiary soldier.
Training was all in all pretty fun. I think it helped that we had such a great group of people. Uh, there's really not much to add about training. I'm just grateful that there WAS some training, unlike my teaching experience in France.
So, below are some photos from that week. They are in reverse order, and I'm having issues right now with adding in captions, so I'm just going to figure that out later. 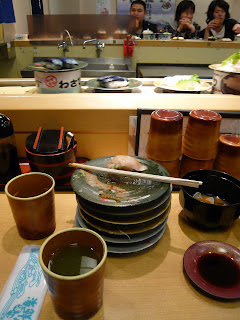 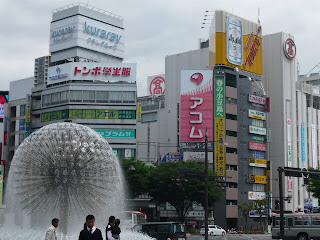 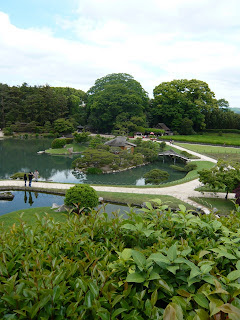 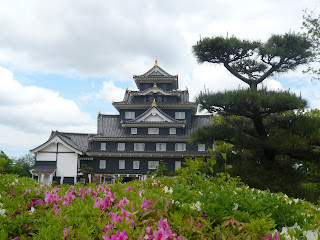 First things first. This blog is a work in progress and it might be awhile before it takes shape. I am a beginner AND tend to be a bit impatient with computer related endeavors. However I want to chronicle my life in Japan for friends, family, and strangers alike. I imagine that someday this blog will have a pleasing aesthetic, and be very engaging....it's also very possible it will just remain as bare bones as it is today.
A Summary:
My name is Whitney. I'm from the southwestern United States. I move around quite a bit, but these days I claim to be from Texas. In one day I will be flying to Japan to teach English to students ranging in ages from 9 months to 18 years. I will work for Amity which is part of AEON. I will be in Hiroshima and I'm very excited about this because I love cities. I taught english in France for a year (in Alsace) so I kind of feel like that has helped prepare me for what I'm about to do...only that I speak French...I do NOT speak Japanese.
I think that will do for now. I'm sure it will be much more interesting once I get there and start posting pictures. I'm kind of into photography so there will be plenty of eye candy.
A word of advice: if you're planning on teaching in Japan, and you want to learn Japanese...start studying in advance. Not the week before. Or in my case, on the flight over there. I've had my books on Japanese for a year now. I have no one to blame but myself. I would be anxious about this if only it all seemed real....
I'm sure my next post will be full of !!!!!
Posted by Whitney at 9:55 PM 1 comment: